Ezirmin : An easy interface to the Irmin library

Ezirmin is an easy interface over the Irmin, a library database for building persistent mergeable data structures based on the principles of Git. In this post, I will primarily discuss the Ezirmin library, but also discuss some of the finer technical details of mergeable data types implemented over Irmin.

Irmin is a library for manipulating persistent mergeable data structures (including CRDTs) that follows the same principles of Git. In particular, it has built-in support for snapshots, branches and reverts, and can compile to multiple backends. Being written in pure OCaml, apps written using Irmin, as well as running natively, can run in the browsers or be compiled to Unikernels. A good introduction to the capabilities of Irmin can be found in the Irmin README file.

One of the downsides to being extremely configurable is that the Irmin library is not beginner friendly. In particular, the library tends to be rather functor heavy, and even simple uses require multiple functor instantiations1. The primary goal of Ezirmin is to provide a defuntorized interface to Irmin, specialized to useful defaults. However, as I’ve continued to build Ezirmin, it has come to include a collection of useful mergeable data types including counters, queues, ropes, logs, etc. I will spend some time describing some of the interesting aspects of these data structures.

You can install the latest version of Ezirmin by

Let’s fire up utop and get started:

m is the master branch of the repository. Ezirmin exposes a key value store, where keys are hierarchical paths and values are whatever data types is stored in the repo. In this case, the data type is a queue. Let’s push some elements into the queue:

The updates to the queue is saved in the Git repository at /tmp/ezirminq. In another terminal,

For concurrency control, use branches. In the first terminal,

The changes are not visible until the branches are merged.

What should be the semantics of popping the queue at home/todo concurrently at the master branch and wip branch? It is reasonable to ascribe exactly once semantics to pop such that popping the same element on both branches and subsequently merging the queues would lead to a merge conflict. However, a more useful semantics is where we relax this invariant and allow elements to be popped more than once on different branches. In particular, the merge operation on the queue ensures that:

Hence, our merge queues are CRDTs.

Irmin is fully compatible with Git. Hence, we can explore the history of the operations using the git command line. In another terminal:

The Git log shows that there have been 4 pushes and 1 pop in this repository. In addition to the data structures being mergeable, they are also persistent. In particular, every object stored in Irmin has complete provenance. You can also manipulate history using the Git command line.

Back in the first terminal:

Since we rolled back the master to before the pushes were merged, we see an empty list. Ezirmin also provides APIs for working with history programmatically.

Clearly this is wrong. Let’s fix this by reverting to earlier version:

Now that we’ve undone the error, we can do the right thing.

Ezirmin supports watching a particular key for updates and invoking a callback function when there is one.

The code above installs a listener cb on the queue at home/todo, which is run every time the queue is updated. This includes local push and pop operations as well as updates due to merges.

Unlike distributed data stores, where the updates are disseminated transparently between the replicas, Ezirmin provides you the necessary building blocks for building your own dissemination protocol. As with Git, Ezirmin exposes the functionality to push2 and pull changes from remotes.

This design provides the flexibility to describe your own network layout, with anti-entropy mechanisms built-in to the synchronization protocol. For example, one might deploy the replicas in a hub-and-spoke model where each replica accepts client writes locally and periodically publishes changes to the master and also fetches any latest updates. The data structures provided by Ezirmin are always mergeable and converge. Hence, the updates are never rejected. It is important to note that even though we have a centralized master, this deployment is still highly available. Even if the master is unavailable, the other nodes can still accept client requests. The replicas may also be connected in a peer-to-peer fashion without a centralized master for a more resilient deployment.

Irmin provides a high-level key-value interface built over two lower level heaps: a block store and a tag store. A block store is an append-only content-addressable store that stores serialized values of application contents, prefix-tree nodes, history meta-data, etc. Instead of using physical memory address of blocks, the blocks are identified by the hash of their contents. As a result block store enjoys very nice properties. Being content-addressed, we get sharing for free: two blocks with the same content will have the have the same hash. This not only applies for individual blocks, but also for linked-structures. For example, 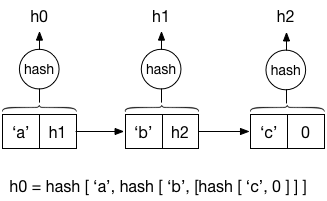 The linked list above is uniquely identified by hash h0 since h0 was computed from the content a and the hash of the tail of the list h1. No other list has hash h0. Changing c to C in this list would result in a different hash for the head of the list3. Moreover, since the block store is append-only, all previous versions of a application-level data structure is also available, and thus providing persistence. This also makes for a nice concurrency story for multiple processes/threads operating on the block store. The absence of mutations on block store mean that no additional concurrency control mechanisms are necessary.

The only mutable part of the Irmin architecture is the tag store, that maps global names to blocks in the block store. The notion of branches are built on top of the tag store. Cloning a branch creates a new tag that points to the same block as the cloned branch.

The real power of Irmin is due to the user-defined merges. Irmin expects the developer to provide a 3-way merge function with the following signature:

Given the common ancestor old and the two versions, merge function can either return a successful merge or mark a conflict. It is up to the developer to ensure that merges are commutative (merge old a b = merge old b a) and that the merge captures the intent of the two branches. If the merge function never conflicts, we have CRDTs.

The simplest mergeable data type is a counter with an increment and decrement operations. Given that we have a 3-way merge function, the merge is intuitive:

While this definition is intuitive, the proof of why this strategy (i.e., computing deltas and applying to the common ancestor) is correct is quite subtle. It happens to be the case that the patches (deltas) in this case, integers under addition, form an abelian group. Judah Jacobson formalizes patches for Darcs as inverse semigroups and proves convergence. Every abelian group is also an inverse semigroup. Hence, the above strategy is correct. Merges can also be equivalently viewed as a pushout in category theory, leading to the same result. I will have to save the discussion of the category theoretic reasoning of Irmin merges for another time. But Liam O’Connor has written a concise post on the theory of patches which is worth a read. 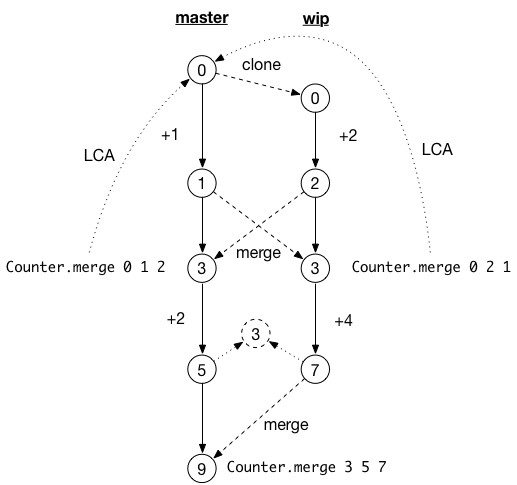 The counter at some key in the master was initially 0. The branch wip was cloned at this point. The counter is incremented by 1 at master and 2 at wip. At this point, both branches are merged into the other branch. The common ancestor here is the initial state of counter 0. This results in counter value of 3 in both branches. Suppose there are further increments, 2 at master and 4 at wip, resulting in counter values 5 and 7 respectively in master and wip.

Another useful data type is mergeable logs, where each log message is a string. The merge operation accumulates the logs in reverse chronological order. To this end, each log entry is a pair of timestamp and message, and the log itself is a list of entries. They are constructed using mirage-tc:

The merge function extracts the newer entries from either branches, sorts them and appends to the front of the old list.

While this implementation is simple, it does not scale well. In particular, each commit stores the entire log as a single serialized blob. This does not take advantage of the fact that every commit can share the tail of the log with its predecessor. Moreover, every append to the log needs to deserialize the entire log, append the new entry and serialize the log again. Hence, append is an O(n) operation, where n is the size of the log. Merges are also worst case O(n). This is undesirable.

We can implement a efficient logs by taking advantage of the fact that every commit shares the tail of the log with its predecessor.

Merges simply add a new node which points to the logs of merged branches, resulting in a DAG that captures the causal history. The following sequence of operations:

results in the heap below.

This implementation has O(1) appends and O(1) merges, resulting in much better performance. The graph below compares the blob log implementation and this linked implementation with file system backend by performing repeated appends to the log and measuring the latency for append.

A rope data structure is used for efficiently storing and manipulating very long strings. Ezirmin provides mergeable ropes where for arbitrary contents, but also specialized for strings. Ropes automatically rebalance to maintain the invariant that the height of the tree is proportional to the length of the contents. The crux of the merge strategy is that given a common ancestor and the two trees to be merged, the merge algorithm works out the smallest subtrees where the modification occurred. If the modifications are on distinct subtrees, then the merge is trivial. 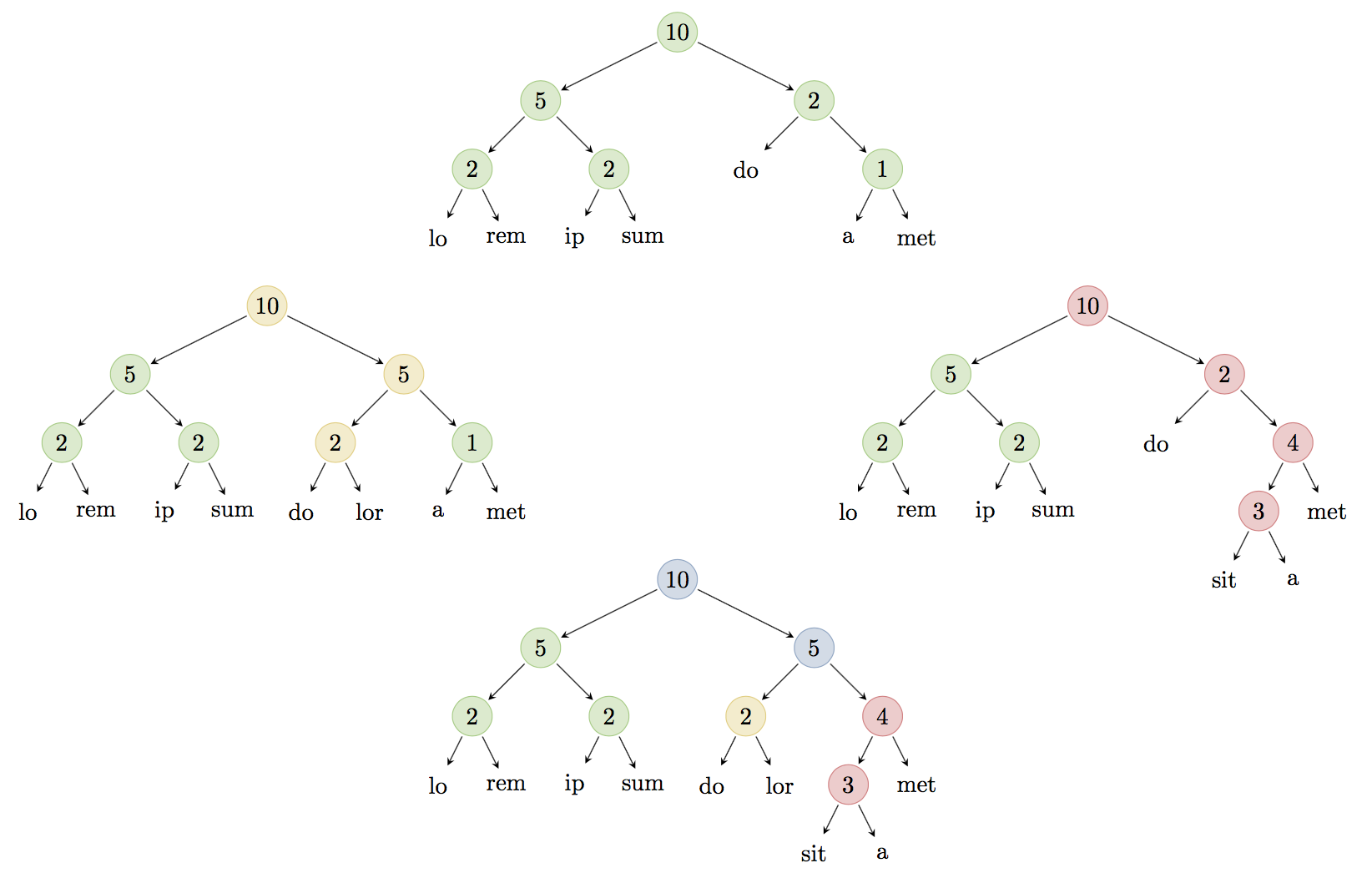 If the modification is on the same subtree, then the algorithm delegates to merge the contents. This problem has been well studied under the name of operational transformation (OT). OT can be categorically explained in terms of pushouts. Mergeable strings with insert, delete and replace operations are isomorphic to counters with increment and decrement. We apply a similar strategy to merge string.

The combination of mergeable ropes with OT gets the best of both worlds. Compared to a purely OT based implementation, diffs are only computed if updates conflict at the leaves. The representation using ropes is also efficient in terms of storage where multiple versions of the tree shares blocks. A purely rope based implementation either has the option of storing individual characters (atoms) at the leaves (and resolve conflicts based on some deterministic mechanism such as timestamps or other deterministic strategies) or manifest the conflict at the leaves to the user to get it resolved. A simple strategy might be to present both of the conflicting strings, and ask the user to resolve it. Hence, mergeable ropes + OT is strictly better than either of the approaches.

Ezirmin is open to comments and contributions. Next steps would be: