Algebraic effects and handlers provide a modular abstraction for expressing effectful computation, allowing the programmer to separate the expression of an effectful computation from its implementation. In this post, I will present an extension to OCaml for programming with linear algebraic effects, and demonstrate its use in expressing concurrency primitives for multicore OCaml. The design and implementation of algebraic effects for multicore OCaml is due to Leo White, Stephen Dolan and the multicore team at OCaml Labs.

Multicore-capable functional programming language implementations such as Glasgow Haskell Compiler, F#, Manticore and MultiMLton expose one or more libraries for expressing concurrent programs. The concurrent threads of execution instantiated through the library are in turn multiplexed over the available cores for speed up. A common theme among such runtimes is that the primitives for concurrency along with the concurrent thread scheduler is baked into the runtime system. Over time, the runtime system itself tends to become a complex, monolithic piece of software, with extensive use of locks, condition variables, timers, thread pools, and other arcana. As a result, it becomes difficult to maintain existing concurrency libraries, let alone add new ones. Such lack of malleability is particularly unfortunate as it prevents developers from experimenting with custom concurrency libraries and scheduling strategies, preventing innovation in the ecosystem. Our goal with this work is to provide a minimal set of tools with which programmers can implement new concurrency primitives and schedulers as OCaml libraries.

A Taste of Effects

Let us illustrate the algebraic effect extension in multicore OCaml by constructing a concurrent round-robin scheduler with the following interface:

The basic tenet of programming with algebraic effects is that performing an effectful computation is separate from its interpretation1. In particular, the interpretation is dynamically chosen based on the context in which an effect is performed. In our example, spawning a new thread and yielding control to another are effectful actions, for which we declare the following effects:

The type 'a eff is the predefined extensible variant type for effects, where 'a represents the return type of performing the effect. For convenience, we introduce new syntax using which the same declarations are expressed as follows:

Effects are performed using the primitive perform of type 'a eff -> 'a. We define the functions fork and yield as follows:

Lets write a simple concurrent program that utilises this scheduler, to create a binary tree of tasks. The sources for this test are available here. The program concurrent.ml:

generates a binary tree of depth 2, where the tasks are numbered as shown below: 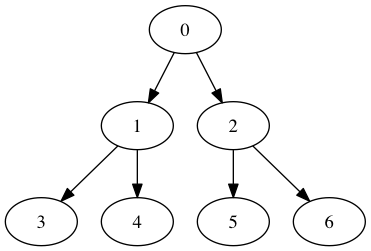 The program forks new tasks in a depth-first fashion and yields when it reaches maximum depth, logging the actions along the way. To run the program, first install multicore OCaml compiler, available from the OCaml Labs dev repo. Once the compiler is installed, the above test program can be compiled and run as follows:

The output illustrates how the tasks are forked and scheduled.

Since OCaml does not have linear types, we enforce the one-shot property at runtime by raising an exception the second time a continuation is invoked. For applications requiring true multi-shot continuations (such as probabilistic programming5), we envision providing an explicit operation to copy a continuation.

Multicore OCaml provides support for shared-memory parallel execution. The unit of parallelism is a domain, each running a separate system thread, with a relatively small local heap and a single shared heap shared among all of the domains. In order to distributed the fibers amongst the available domains, work sharing/stealing schedulers are initiated on each of the domains. The multicore runtime exposes to the programmer a small set of locking and signalling primitives for achieving mutual exclusion and inter-domain communication.

The multicore runtime has the invariant that there are no pointers between the domain local heaps. However, the programmer utilising the effect library to write schedulers need not be aware of this restriction as fibers are transparently promoted from local to shared heap on demand. We will have to save multicore-capable schedulers for another post.