OCaml is a strongly typed functional language with automatic memory management. Automatic memory management alleviates the need to manually deal with memory memory management, and by construction, avoids a large class of bugs. However, abstractions are not free in OCaml. Unlike MLton, a whole-program optimizing Standard ML compiler, which I used to hack on in an earlier life, in OCaml, one needs to be particularly aware of the cost of introducing abstractions such as higher-order functions and modules. This is often at odds with desirable programming patterns one tends to embrace in a higher-order modular functional language. Writing performance sensitive code in OCaml remains a skill that is acquired gradually through experience.

There are of course, excellent resources available to understand the performance implications of OCaml abstractions. However, often times, I simply need a way to profile and uncover performance bottlenecks in my program, before I can apply any targeted optimizations. Profiling along the following three axes are particularly useful: time, counts and allocations. OCaml has good support for two of these. While ocamlcp with ocamlprof gives you count profile, one can use the standard Unix profiler gprof for time profiling. However, these do not necessarily help with identifying the cost of abstractions, for which one needs an allocation profiler1.

The state of allocation profiling in OCaml

While allocation profiler is not part of the standard OCaml distribution, several alternatives do exist. Memprof from OCamlPro provides “non-intrusive memory profiler for OCaml applications”, with a simple online version and a commercial version with fine-grained tracing. Mark Shinwell has an allocation profiler for OCaml 4.02 native code programs generated by ocamlopt. Unfortunately, neither of these options were suitable for me as the Multicore OCaml currently only supports bytecode compilation, and has a markedly different GC. So I decided to implement my own for the multicore compiler. Since the allocation profiler will be useful in general, I have also ported it to OCaml 4.02. This post talks about the vanilla OCaml allocation profiler.

The idea of this allocation profiler is to record the allocations and associate them with the position in the code where the corresponding block or closure was allocated. In particular, we do not record the call stack that led to the allocation point, which would have provided us a more accurate picture. One can get pretty far with just the flat profile. Running the bytecode program under the modified interpreter produces a profile, which is then analyzed offline.

The bytecode interpreter of OCaml is remarkably simple, as is the patch for the allocation profiler. In this section, I will detail the implementation of the profiler. If you are interested in just using the profiler, do skip right to the instructions.

When the bytecode is loaded by the interpreter in caml_load_code, it allocates an array for the bytecode. caml_start_code points to the start of this array. The program counter pc is a pointer into this array. We maintain a distinct code pointer profile_pc that always points to the instruction and never its operands. The offset of profile_pc from caml_start_code uniquely identifies a instruction in the bytecode executable. We will use this offset to record the allocation points.

We allocate an array caml_profile_counts of unsigned integers whose length is equal to the length of the code, into which we will store the allocation counts. There are two main ways in which OCaml allocates memory; Alloc_small for allocating in minor heap, and caml_alloc_shr for allocating in major heap. We modify both to record the allocations at a given instruction. We modify interp.c to update profile_pc for instructions which potentially allocate. Allocations for arrays and strings are performed in their corresponding C functions through caml_alloc. Such allocations are covered by recording the instruction in Setup_for_c_call.

caml_alloc_shr is also used by the GC for promoting live minor heap objects to major heap at the end of a minor GC cycle. Allocations by GC is ignored by resetting profile_pc to NULL before minor collections. Hence, the profiler only counts allocations by the mutator. Finally, the interpreter outputs the profile at the end of execution of the program.

In order to use the profiler, compile the OCaml programs with the bytecode compiler ocamlc with -g option to record the debugging information. This will be used to interpret the profile. When using ocamlbuild it is necessary to compile and link with -g (with -cflag -g -lflag -g).

First, get OCaml 4.02 with the allocation profiler, and build it using opam-compiler-conf:

Let us profile the Eight Queens program. Profiling is enabled by setting the CAML_PROFILE_ALLOC to the output filename of the profile. 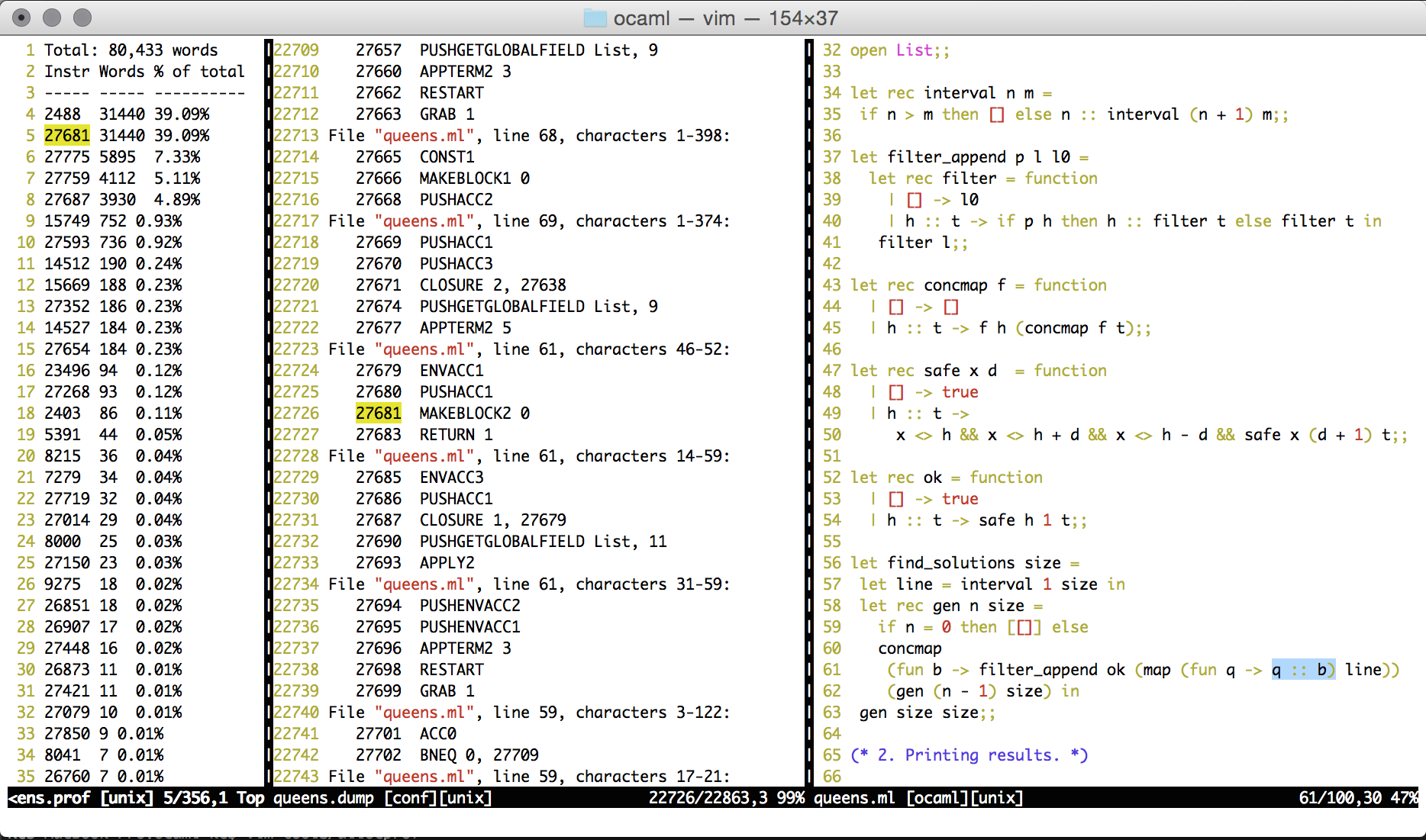 We can see that the program spent 39.09% of allocations for appending to lists in queens.ml line 61. For the curious, the other 39.09% was spent in List.map function.

The profiler normally writes out the profile at the end of the standard program termination, when the interpreter has run to completion. However, programs may terminate early by explicitly invoking exit. In such cases, the runtime does not get a chance to output the profile. Hence, a function output_profile: unit -> unit is provided to explicitly request the profile to be written out to the filename provided in CAML_PROFILE_ALLOC. The following example illustrates the use case in a program that uses the Async library:

The program is compiled and run as follows:

Thanks to trevorsummerssmith for the motivation and the example.

The allocation profiler has been quite useful for optimizing small programs. It would be interesting to see whether it scales to larger ones. Also, here is my (non-exhaustive) wish list of features: