Over the past few weeks, at OCaml Labs, we’ve deployed continuous benchmarking infrastructure for Multicore OCaml. Live results are available at http://ocamllabs.io/multicore. Continuous benchmarking has already enabled us to make informed decisions about the impact of our changes, and should come in handy over the next few months where we polish off and tune the multicore runtime.

Currently, the benchmarks are all single-threaded and run on x86-64. Our current aim is to quantify the performance impact of running single-threaded OCaml programs using the multicore compiler. Moving forward, would would include multi-threaded benchmarks and other architectures.

The benchmarks and the benchmarking infrastructure were adapted from OCamlPro’s benchmark suite aimed at benchmarking Flambda optimisation passes. The difference with the new infrastructure is that all the data is generated as static HTML and CSV files with data processing performed on the client side in JavaScript. I find the new setup easier to manage and deploy.

If you observe the results, you will see that multicore is slowest compared to trunk OCaml on menhir-standard and menhir-fancy. But if you look closely: 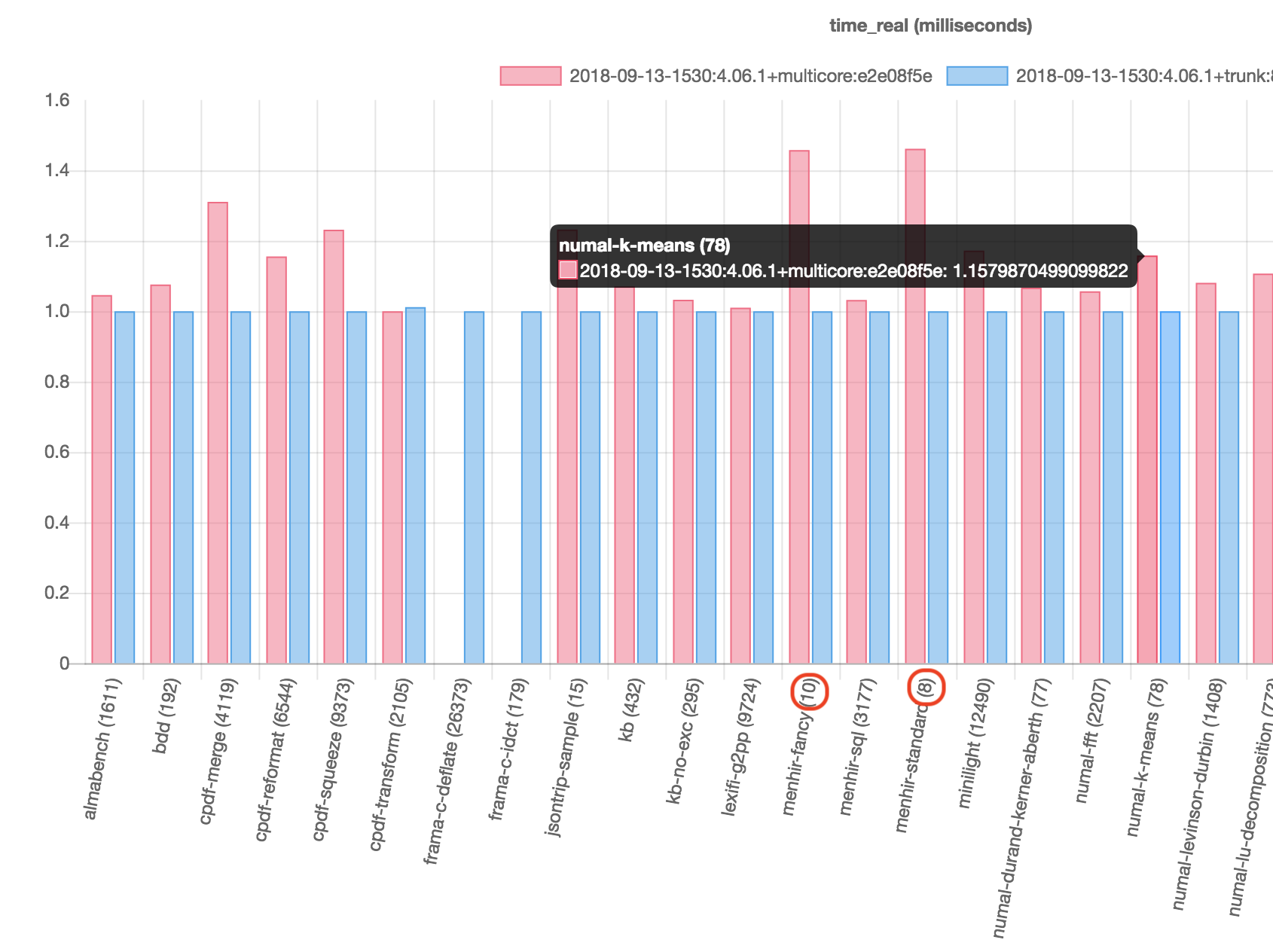 these benchmarks complete in less than 10 milliseconds. This is not enough time to faithfully compare the implementations as constant factors such as runtime initialisation and costs of single untimely major GC dominate any useful work. In fact, almost half of the benchmarks complete within a second. The quality of this benchmark suite ought to be improved.

Make a PR to multicore branch of ocamllabs/ocamlbench-repo. The packages directory contains many examples for how to prepare programs for benchmarking. Among these, numerical-analysis-bench and menhir-bench are simple and illustrative.

The benchmarks themselves are run using these scripts.

There is a handy Dockerfile to test benchmarking setup:

You can view the results by:

Now on your host machine, point your browser to localhost:8080 to interactively visualise the benchmark results.

Aim to get your benchmark compiling with OCaml 4.06.1. You might have trouble getting your benchmark to compile with the multicore compiler due to several reasons:

If you encounter trouble submitting benchmarks, please make an issue on kayceesrk/ocamlbench-scripts repo.